César Viveros Herrera: No Me Conformo

For this exhibition, César Viveros Herrera asked for the Lorenzo Homar Gallery to be painted a deep red so he could recreate a temple or “teocalli” of out of the memories of his youth. Born in Tejería, Veracruz, Viveros, working from the recollections of his childhood where he would come across ancient artifacts from past civilizations in his father’s cornfields, recreates precious iconographic pieces to construct an ancient place that is still alive and real. It is a world populated with relics of Coatlicue, the Aztec Mother God, to Kukulkan, the feathered serpent, and ancient ruins. To many of the people of his town, these relics did not seem valuable, but to him, the artifacts awoke an intense interest in learning about pre-Columbian civilization and his personal connections to them. Viveros perceives that connection with civilizations from the Olmecs to the Mayans, the Aztecs and Mexico, and with him here, a connection to Philadelphia.

As a muralist, Viveros applies his keen sense for seeing these connections to each community he makes a mural for. He is able to listen to the people, opening himself to them so to comprehend their needs and desires. In this show, he is listening to his own voices, his present context, and his cultural and ancestral influences. Over the coming weeks, he will use the walls of the gallery to create a personal mural. On November 2nd, he will conduct a ceremony for the Day of Dead. During the reception, guests can go to a computer station, provide their name, and, by using the Mayan calendar, decipher their Mayan name.
César Viveros Herrera has been painting murals in Philadelphia for the past 10 years in a wide range of communities. His photorealistic murals offer fantastical collages, often covering entire sides of buildings to create a reflective sense of place for the particular community it depicts and with whom he deeply engages. One of his murals is New Fire (Fuego Nuevo), on Girard near 3rd street, and Cops and Kids at S. 20th St. and Point Breeze Ave. He is also the president of the Mexican Cultural Center.

Interview with Viveros is here. 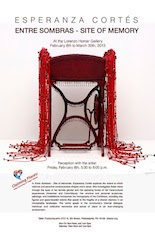 In Entre Sombras - Site of Memories, 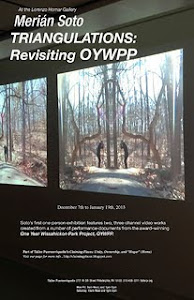 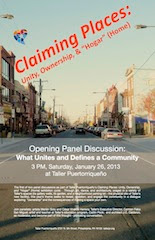